Light a light - a
constant labour

Maritime Safety Queensland is responsible for beacon replacement and maintenance on the water. This extract from a book in progress recounts an excursion with an MSQ crew.

At work, Anthony MacFarlane is called “Pin”. It’s short for Split Pin (he’s stringbean thin) and it has become an extended joke to allocate to his family sobriquets that are a variation on the theme. On a cool June morning Pin is at the helm of the Maritime Safety Queensland motor vessel, Cowan, dark glasses hiding his eyes, hat low on his brow. His sidekick for the day, Phil Ward, has generously given me his seat in the cabin and is sitting on the open bench at the back. As we leave the Pinkenba wharf in the river, Pin radios in to Brisbane Harbour to tell them he’s moving through the port and to get an update of what ships might be arriving or departing. We’re clear.

It’s a grey morning, a small swell grows to meet us as we head south east through the boat passage under the low bridge at Whyte Island. We see a black swan, descendant of birds that were hunted here by early settlers in search of meat. It is paddling along serenely, at peace with the morning, more endangered by motors now than people with dinner on their minds. As we pick up speed, the boat slams itself against the water, the trough intervals short and jarring. Back where Phil is sitting, the wind whistles past and spray flares in a fine curtain.

We hear on the VHF radio that a tree is floating nearby which might be a hazard for boaters. Whenever water is released from Wivenhoe Dam, branches and hyacinths, as well as rubbish, washes down into the bay. The debris that MSQ picks up includes more oddities than floating trees – Pin says they picked up a 30,000 litre plastic water tank, shortly before this trip. On the VHF Pin volunteers to look for the tree and we start to scour the water, coming in on the last sighted position. A bit of back and forth and we see it, pull alongside and haul it aboard, and we’re off again with foliage filling the rear of the boat.

We’re heading for the beacon at the Banana Banks, covering the distance rapidly. Phil sorts his tools and checks his small globes.
The Brisbane regional office of Maritime Safety Queensland is responsible for around 3000 beacons stretching from Noosa in the north to just before Jumpinpin in the south. On the water this would be Double Island Point to Canaipa Passage but also includes lakes and inland waters. The beacons come in many forms and have several functions. Boaters studying for their licences learn the basics – green markers are kept to starboard coming into a channel, red to port. Obviously, when leaving port, this is reversed. To further aid detection at a distance, or to help when the roosting cormorants have whited out colour with their excrement, starboard markers are triangular, port markers square. There are yellow warning beacons and middle of channel markers. The cardinal markers tell mariners to stay to north, south, east or west by the positioning of two black triangles in relation to each other. The beacons are lit for night-time navigation and, slower than the shag defacement but fast enough to make the job constant, the lights on the markers go out and must be replaced. 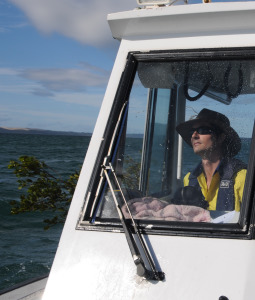 Anthony MacFarlane at the wheel.

The beacon at the banks is fixed in position, its pole sunk a couple of metres into the seabed. Three shags are perched on top and waiting. Phil climbs onto the bow, Pin eases the boat in and Phil goes from the boat to the pole in a smooth grab and step, and then up the ladder to brace himself inside the metal ring near the top. At his approach the shags take off and circle lazily, waiting for him to depart. Guano festoons the metal and small stalactites of it hang below the support ring.

Pin takes the boat back a bit to keep it off the pole. Phil has his small bag of tools and spares with him. He checks the solar panel, the battery and the globes. A few minutes later he gestures and Pin closes in. Phil hops back onto the boat to get a new battery, then he’s back on the pole, installing it and replacing the six small globes that will rotate a new light into position as each dies to give many months of service.
Pin watches Phil constantly while keeping the boat close. It’s more than an empty exercise in safety. On a previous run, Phil was in the boat while another of his workmates was fixing a light when a vehicle barge hit the pole with his mate on it which is the kind of incident, usually not quite so close to home, that makes MSQ’s job neverending. Damaged beacons, whether from a Fastcat collision with a marker in the river or a pleasure boat being driven carelessly in the bay, have to be removed and replaced, as soon as practical.

At the workshop at Pinkenba lights are repaired and tested. There are always new models, the efficiency of lights is checked constantly. And on the water the task of fixing and replacement goes on. 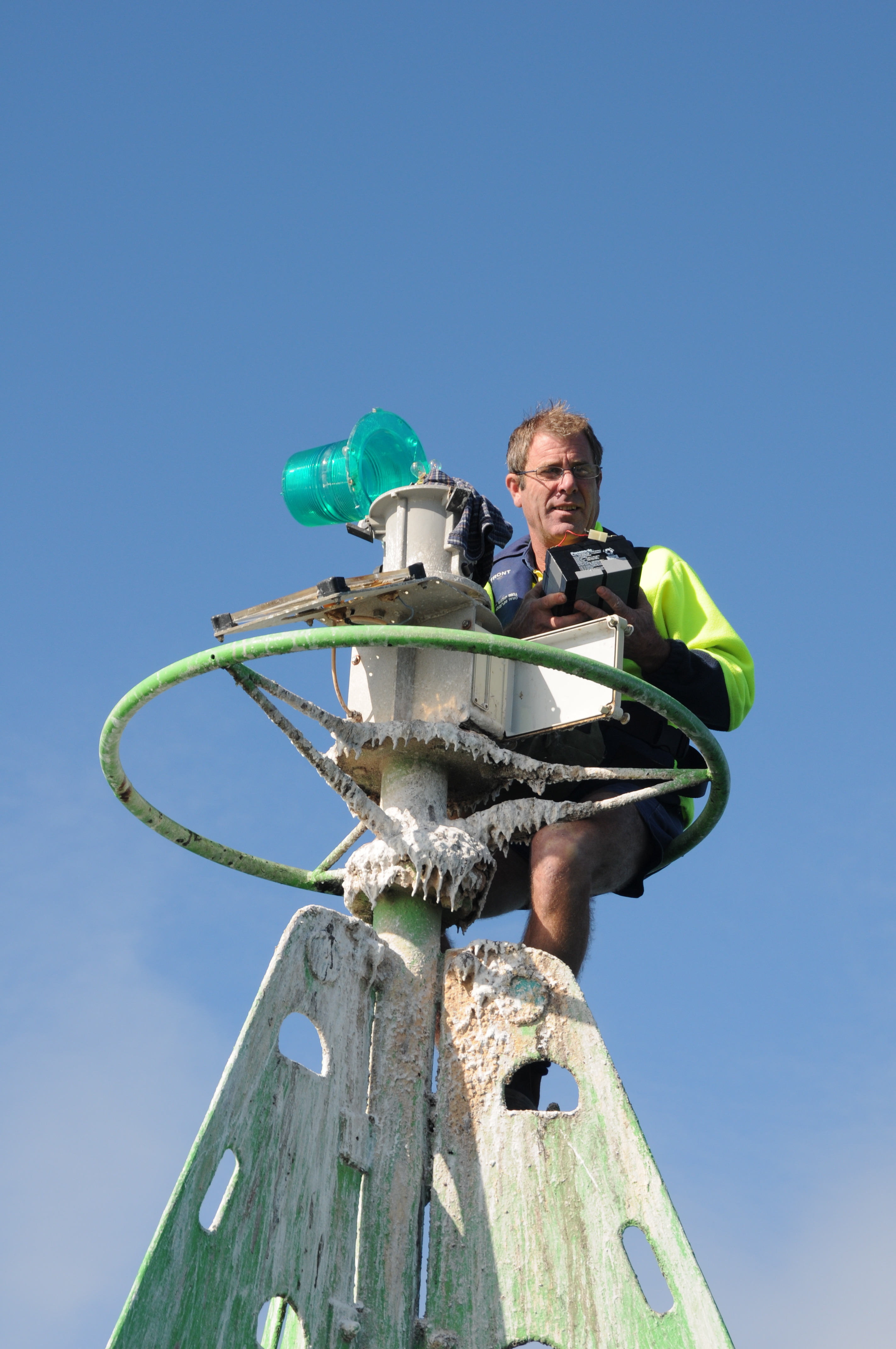