By Rob Mundle, ABC Books, 382pp. $45.00. Kindle edition available. Review by Jennifer Moran
There are many reasons to study the arrival of the First Fleet in the Great South Land – history, diasporas, dispossession and a search for courage amongst them - but Rob Mundle has focused on an often overlooked aspect, the extraordinary seamanship it took to move 11 ships and their sorry cargo from the known world to the relatively unknown coast of New South Wales in 1787-1788.

Mundle brings his own extensive seafaring experience to the task. A veteran sailor of both race and cruising boats, he has combined his passion for crossing oceans with his writing, forging a long career as a journalist and author covering sailing issues and events.

His best known book is Fatal Storm, about the 1998 Sydney to Hobart Yacht race in which the fleet encountered a horrific storm off the coast of New South Wales and six sailors died.

The First Fleet follows Mundle’s more recent publishing ventures – Bligh: Master Mariner, Flinders: The Man who Mapped Australia and Cook: From Sailor to Legend in mining the well-known stories of the establishment of Australia’s European settlement to produce books in which the sea and the men and women who traversed it are the chief focus, rather than the many other aspects of that long and often painful period of nation building.

In The First Fleet, Mundle considers the challenges that fell to Arthur Phillip as he drew up plans to satisfy the growing desire of the British Government to move the felons housed in prison hulks to some other part of the world. With the newly independent America no longer wanting to accept British prisoners and the few, aborted attempts to ship them to Africa showing the folly of that endeavour, the idea of sending them to the other end of the world became increasingly popular.

Phillip’s career had predisposed him to adeptness in planning and in commanding men and he had, additionally, some experience of agriculture which, combined with his naval accomplishments made him an ideal candidate to transport the first batch of prisoners and set up the fledgling settlement. Mundle describes the difficulties of getting ships and men, and the provisioning of the ships. He gives a précis of the kinds of felons that would be transported and the attitudes of the seafarers to their human cargo.

The privations and challenges of the voyage, with some of the ships not sea kindly, and the difficulties inflicted by violent weather and sea state made the 17,000 nautical mile journey daunting for seasoned seafarers. One can only wonder what the prisoners, held below decks in foetid, cramped quarters, made of their situation.

Mundle quotes from the journals of Watkin Tench and Jacob Nagle and has consulted the papers and journals of Phillips, John Hunter, Philip Gidley King and other First Fleet chroniclers to flesh out the stories of the voyage and the first years of settlement.

Botany Bay was Phillips’ destination but the fleet’s first few days there made it apparent that it was a less than ideal spot for a settlement as the ships were not well protected from bad weather. Phillips headed north and found that Port Jackson and, in particular, the cove that he christened for Lord Sydney were suitable, providing fresh water for drinking and deep anchorages close to the shore.

Mundle adds in to his account a few of the other extraordinary voyages of those early years of settlement – the voyage of the Sirius which was sent to collect provisions from the Cape of Good Hope; the transporation of supplies and prisoners to Norfolk Island by Supply and Sirius; and the escape voyage of William and Mary Bryant with their two small children and seven others to the north in a small boat.

Mundle provides a glossary at the end of the book and lists of ships, officers, men and families, of convicts and of provisions. The book is adorned with beautiful endpapers and several pages of coloured illustrations. 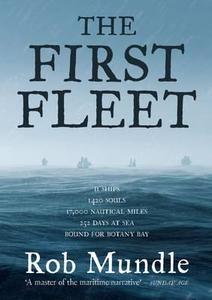